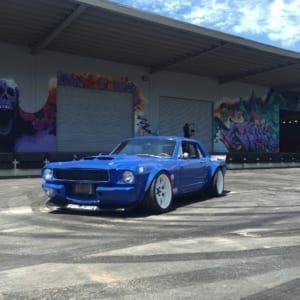 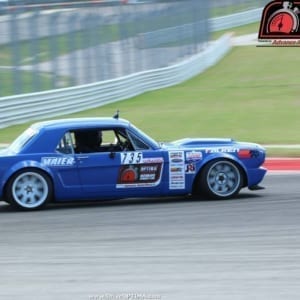 Ol’ Blue is the Mike Maier Inc flagship vintage vehicle. This 1966 Ford Mustang Coupe began as a wedding present to Mike’s wife Brianne and has since evolved into the pro touring monster that is seen as the fastest vintage Mustang in the US.

Mike built this 1966 Ford Mustang Coupe as a wedding gift for Brianne when they were married in 2005. Ol’ Blue began as a simple restomod build with some 17″ wheels, leaf springs, and stock style front suspension.  The powertrain was made up of a 302 out of a foxbody, a good carburetor, and a 4 speed toploader which complimented the simple suspension system. As the years went on the car went through a few changes as the test bed for Mike Maier’s suspension systems.  Over the last decade the simple suspension has been removed and has since been replaced with various Mike Maier designed suspension systems.  Before releasing any products to the public they go through rigorous testing to not only ensure they are robust enough, but also to ensure they perform up to our standards.

In the latest revision of Ol’ Blue it was lowered 2 inches from its previously lowered stance and the track width was also increased by 4″ from its already widened state. While the car may have moved away from its nostalgic classic look its purpose has also changed.  Ol’ Blue is MMI’s tool to test new theories and innovative design concepts that will allow us to create a better product for the track guys and street cruisers alike. It represents the concept of redeveloping synergy.  The car also acted as the magnet to pull together our partners we have today.

Mike Maier Inc designs are developed and tested on this workhorse of a vehicle several times a month at road course and autocross events.