The decision has been made. Mike Maier’s Old blue is getting lower, wider and new wiring. We will need new front control arms and spindles. The back will need a little more, the plan is to keep the guts of the MOD2 , but just raise it up in the car to keep all the geometry. This is super easy when your talking with your buddies, But somehow every time when the tools come out only one or two guys are left ready to work. Well that’s better than none.

The first order of business is to pull all of the old parts out and the mock up the rear end housing and the front hub to their new proposed locations. At this point we put all of the hard pivot points into the computer and started to figure out what would be the best plan of attack with respect to geometry. Every thing in the car is built off the cars foundation and that is the geometry. 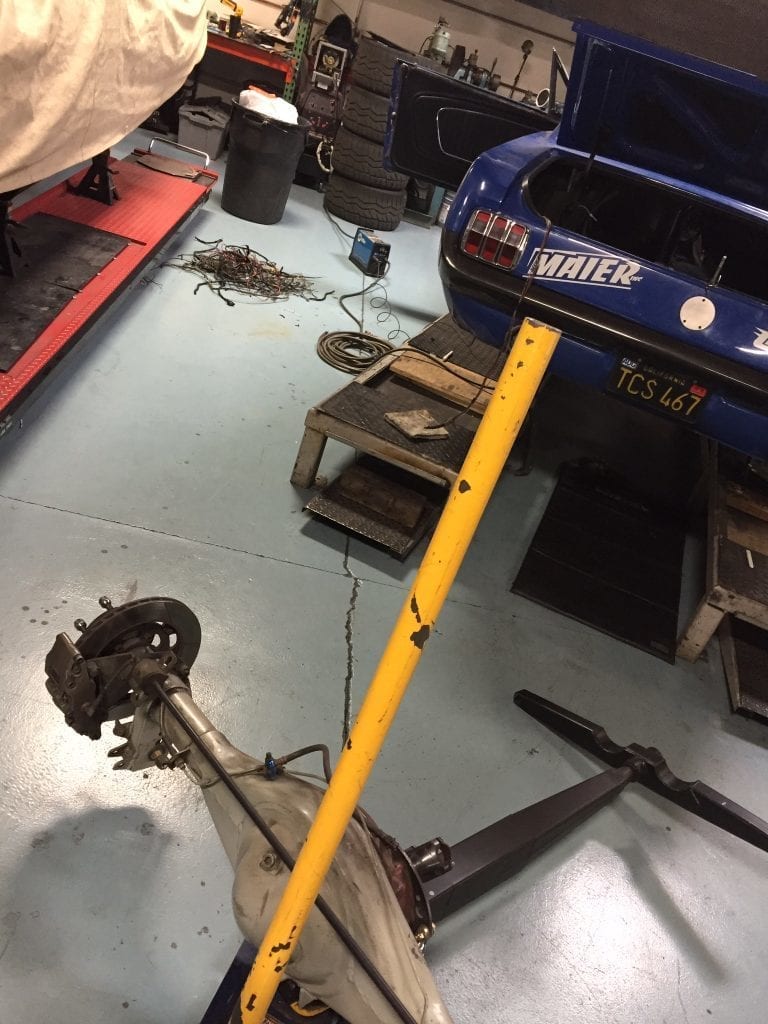 The front suspension is already a prototype R&D MOD2 and its mounting points are all vertically adjustable. This made everything much easier and all of the pick up points were shifted up and this got us most of the way there. With the new ultra low ride height we could not get everything we wanted out of the chassis mounts. We ended up employing a drop spindle to get the rest of the job done.

To get the width increased we made up an extended set of MOD control arms they are basically a stretched version of the 65 MOD1 control arms. 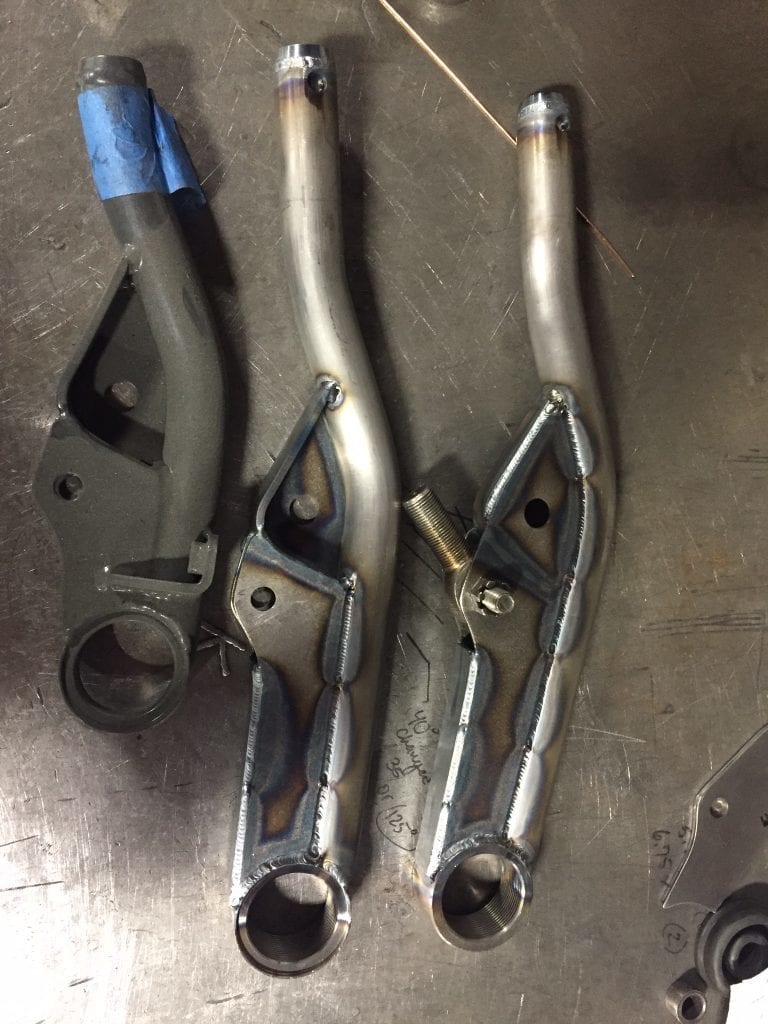 The back was a little more involved. We took out the prototype MOD2 rocker system and installed a new standard equipment MOD2 rocker system. However with the new ride height, the frame rails were much too close to the axle. The remedy was to simply raise the rails for vertical clearance. Also the rear end housing had to be dealt with. The lower control arm brackets needed to be corrected for proper geometry. This turned out to be one of the most labor intensive pars of the job. 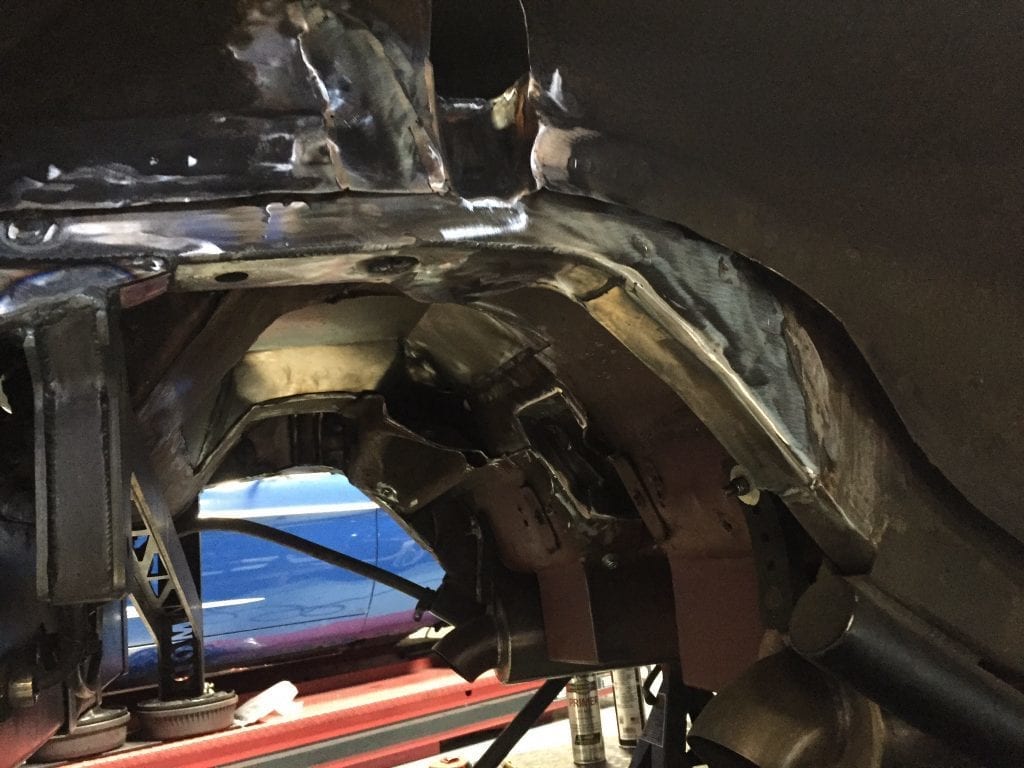 While all of this fabrication was going on we also had some basics to attend to. The wiring has been plaguing us over the years. This also had to be ripped out and remade. We have also had growing pains with some torque arms as of late and this put a bevy bind on our drive shaft. Our beautiful Dynotech drive shaft was getting beat up bad so a couple of fresh Dynotech drive shafts had to be made up. 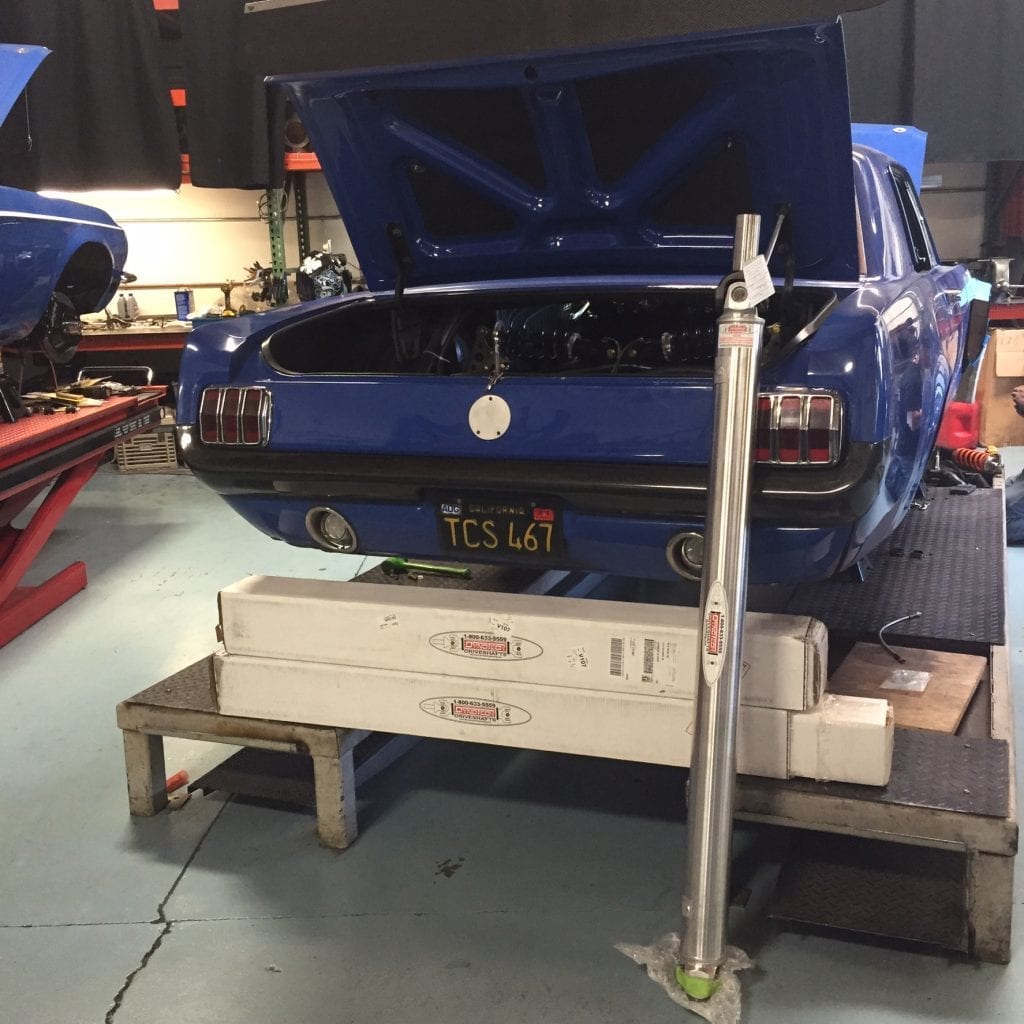 By this time we started to get a handle on things. Progress was slow but consistent . The rear end seemed to take for ever. We had straggling to do’s here and there to wrap up loose ends. Things like mounting brakes seem to skip the big list. 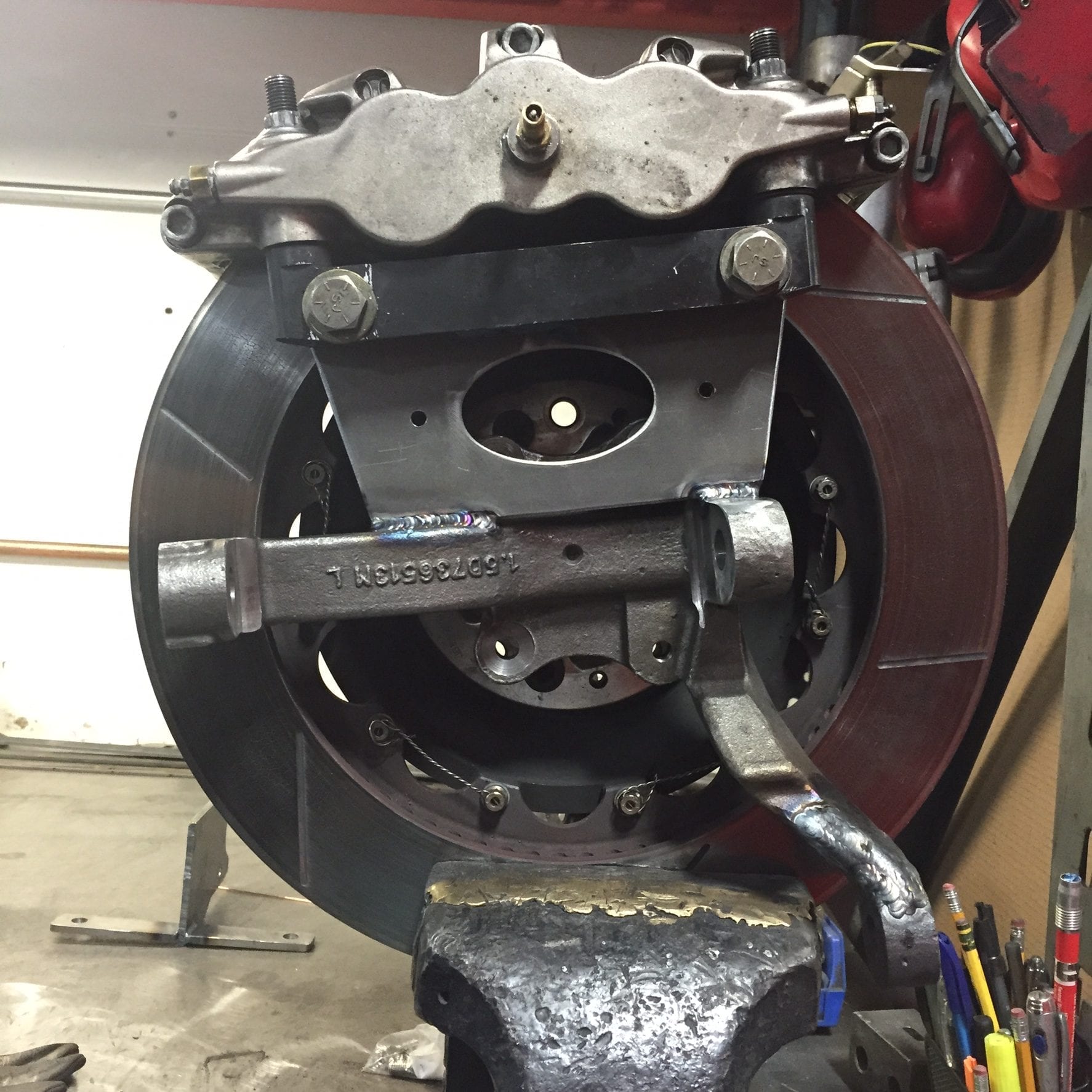 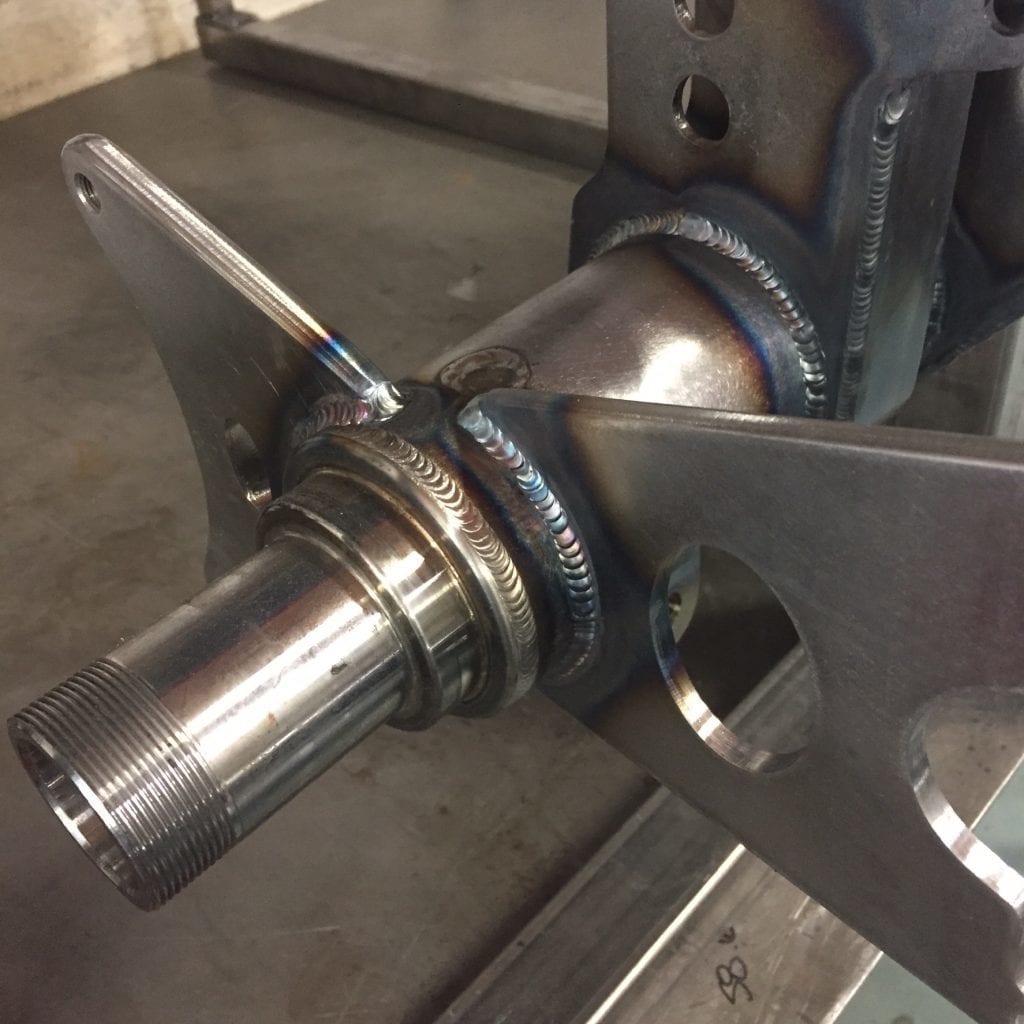 Once we got the chassis components completed. We then moved on to the body work. We still had not come up with much of an idea how we were going to flare the car. We had several ideas, but none of them stuck. Finally mike stayed late one night and roughed in a flare concept out of cardboard that wasn’t half bad. We left the car like this for a day or so to let it marinate for a while just to make sure. 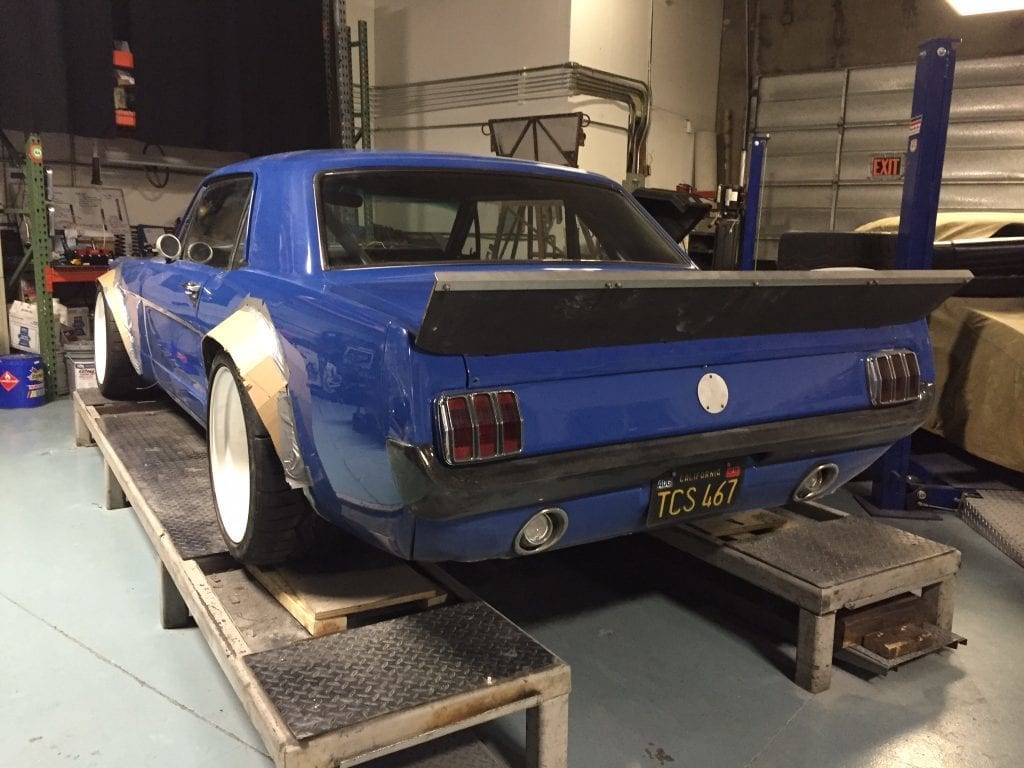 At this time the decision was to be made on what/how we were going to make these flares. We found some aluminum in the shop that looked like it would do so we started cutting patterns out. This was handled by Mike and shop guru, Gary Mole. Gary was the one in charge of the wiring and anything else that Mike came up with. With uncharted territories like this Mike was reassured with Gary’s confidence and they kept going. 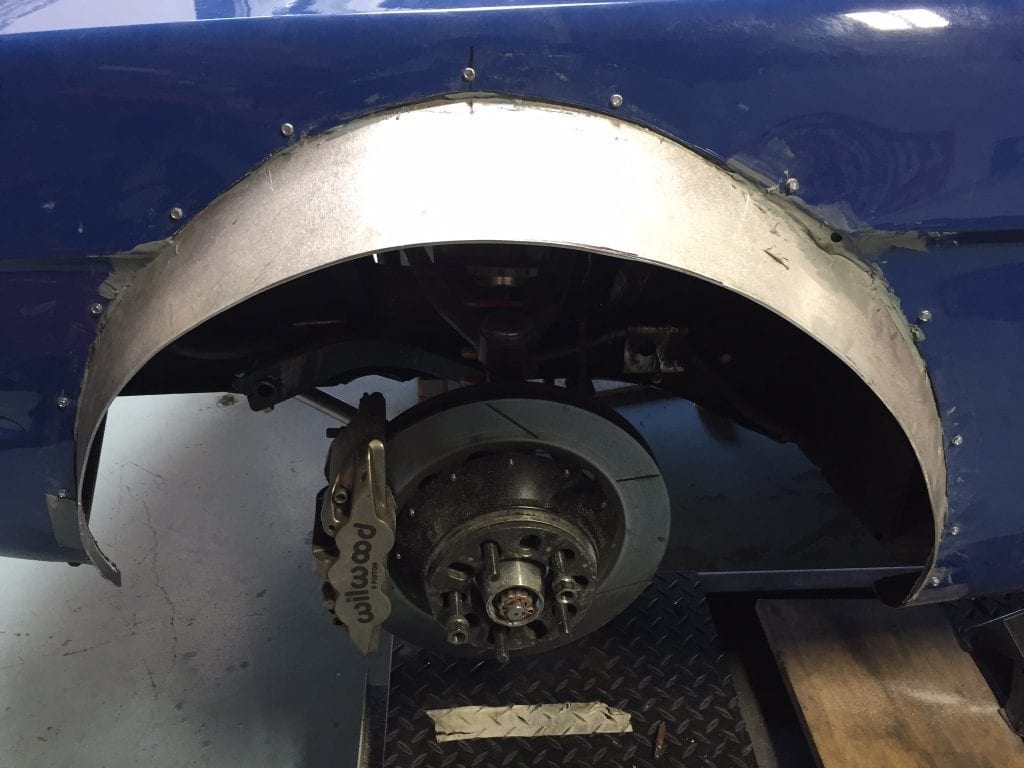 After a couple of days of thrashing we called up an old friend for the paint work. Arthur from Alameda Collision is one of those body shops that still understands the privateer. He took the car in and got it out in record time. The boys down there really did us right. While the car was at paint mike met up with the family for a short recharge.

Once the car got back from paint the guys had about a week to get Ol Blue back up and running for the first practice. Doing their best for the customers already slated during the days all of this was done at night. Every thing from trim, alignment, and interior had to go back together. This was finished up at about ten at night the day before the first test.
The goals for the first test were to make sure everything worked as planed. Then to start tuning. This was a lot to ask at an autocross given the number of laps possible. Ultimately the main and final goal was to improve the transitional control of the car. The way the car feels as it is setting into the turn; Although the car was not tuned yet Mike could clearly feel the difference. This was for sure a good first test. The car stayed all together and it continued to feel better every run. 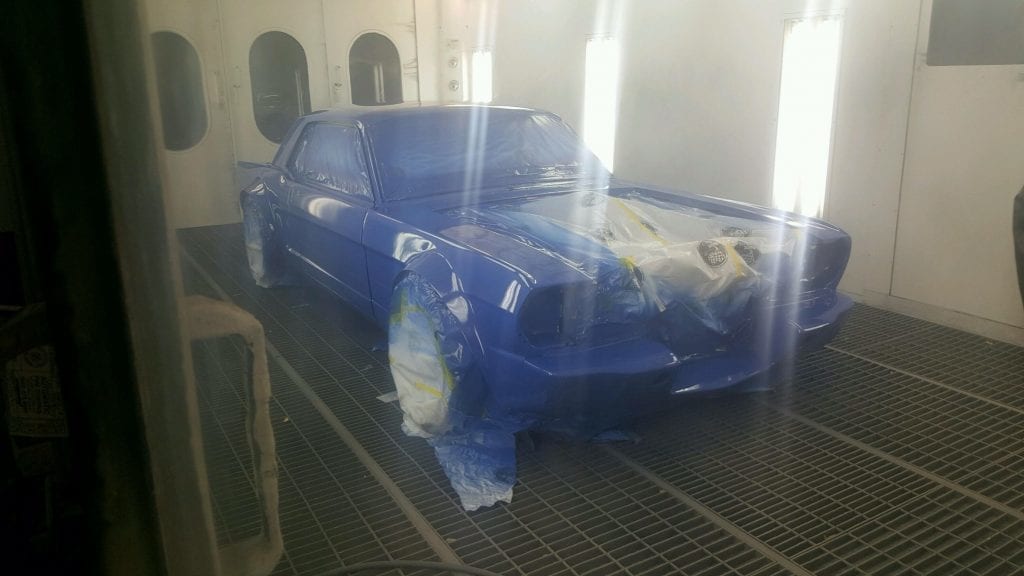